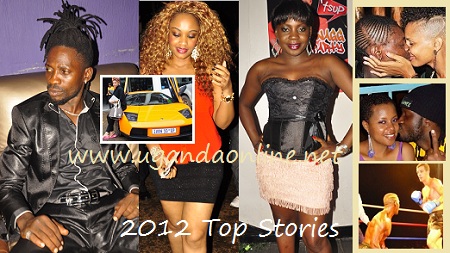 It’s a few hours to end the year 2012. The year began well and ended with the loss of Artiste Sera and the Butaleja MP Cerinah Nebanda among the horrible tragedies. Socialite Bad Black was released on bond to go for her breast implants, Zari was among those who completed 2012 with a big smile after cruising a Lamborghini Mercy on Kampala roads.

Below we bring you other top stories of the year that was:

1. Bobi Wine Vs Bebe Cool Show, Who Won? – The Battle of the Champions between Wine and Cool – It’s still a hot topic of who won the battle long after it ended.

2. Upcoming Artiste Sera Nampijja Dies at 22 – Sarah Nampijja aka Sera had only been in the music industry for only three years before she died.

3. Model Kabareebe in Raunchy Butt Show at Sisqo Gig – Then came the city model whose butt cheeks made headlines more than most upcoming artistes.

4. Bobi Wine Bounced at Kololo Independence Grounds – The Ghetto president wanted to rub shoulders with the other Presidents that were in the country during the independence celebrations, but he was arrested as he made his way to the pavilion.

5. Sylvia Owori and Zari French Kiss On Boat Cruise – This was when the two mothers locked lips on a boozy boat ride.

6. Bebe Cool in New War With Bobi Wine and Chameleon – The top guns decided to visit the Alphabets by referring to one another as Neighbour A, B-Z.

7. Barbie Wine Hits Back on Musicians-Wives Talk – Who is Who among the Musicians’ wives?

8. Chameleone’s Wife Daniella Atim Beats Up a Scribe – The no nonsense Daniella slapped Kasuku of  Dembe FM for spreading wrong rumours about their Seguku house.

9.  Zsamboki Mate Thumps Golola – During the training, Golola used to say that he was not a joking subject and that he had a PHD in pain but all that failed to work thus blaming it on his ‘discolocated’ leg. He was advised to try comedy.

10. Zari’s Hubby Semwanga Buys a Second Lamborghini – Ivan Ssemwanga bought an orange Lamborghini but  some sections of the public were of the view that this was the white Lambo and not until the two rides are parked together that they will be convinced.

11. Zari Finds Love in Basketballer Lugudde – This was the best thriller movie of all times by film star Zari who is also the hottest Ugandan babe in 2012.

12. Iryn Namubiru Beaten By Ex-Husband Frank Morel – The Begombeko singer could not hold it anymore and made it clear that she had separated with her hubby four years back after a fight at a train station.