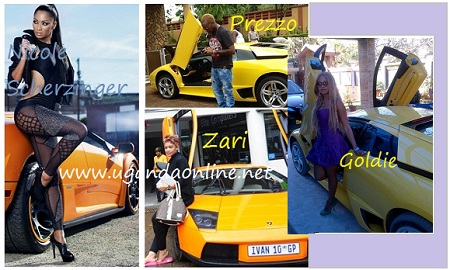 As expected Zari was quick at doing what she does best of course with both the vertical doors wide open. Nicole Scherzinger was captured doing the same thing but she did not seem bothered by the doors.

Kenya’s rapper also former Big Brother All Stars representative recently relocated to Nigeria and bought an apartment to join his lover Goldie Harvey. Prezzo was seen posing next to a Lambo with both doors open while in Nigeria.

His Gal friend, Goldie equally left the Lambo doors open and we are now wondering if posing next to a Lambo without opening the doors makes it less of a Lamborghini. Goldie and Prezzo took their pics using the same Lambo that was allegedly used in a video shoot.