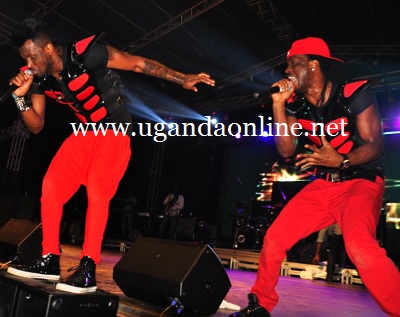 Organisers of the recently concluded Chop Ma Money Concert are nursing losses after proceeds from ticket sales went missing. Over Shs450m that was collected from various points that included Lugogo Forest Mall, Nakumatt Supermarket, Capital Shoppers among others was reported at Jinja Road police as missing.

The money that was collected at the gates was stolen too leading to the collapse of one Yvone a director of Silverback Investments who was rushed to Case Hospital under critical condition.

Yvone had done most of the funding for the show and on learning that the money had been stolen, she just fainted", our source added. As Yvone was being rushed to hospital, the rest of the Silverback Investments directors rushed to Jinja road police to file a case of theft.

Jinja road police is now hunting for the suspects who are believed to have crossed to DRC. Talk of chopping their money.
Related:
Fair Turn Up at P-Square Concert
P-Square Meet and Greet Party at Cayenne