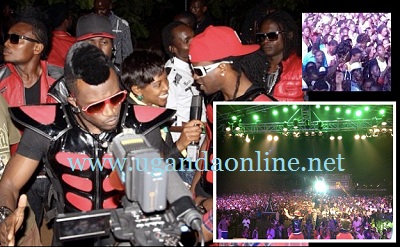 A week back, the Nigerian RnB duo were in Rwanda at Amahoro stadium with a seating capacity of 52,000 filled to capacity and a number of fans standing. That was an invasion on Rwanda but looks like the Ugandan Invasion did not work out as the Rwanda concert.

The P-Square concert had about 10,000 fans beating the likes of SisQo and Wayne Wonder that flopped terribly. The low turn up was largely attributed to the various end of year parties, plus the heavy christmas traffic that dominated the entire day spreading into the night.

Local artistes like Yung Mullo, Cindy, AK47 and Jose Chameleone among others curtain raised for the Nigerian duo, Peter and Paul Okoye. Vybes production provided the equipment and the stage was average though the lighting was spot on.

The P-Square duo thrilled revellers with top hits like ‘Beautiful Onyinye’ with Rick Ross missing in action via the rap bit.  ‘Alingo’, Do Me I Do U among others left gals screaming wild. Moze Radio and Weasel joined the P-Square to do ‘Nakudata’, Goodlyfe’s first song.

It was fun in the general happiness area as revellers there were free to jump about as opposed to their VVIP’s who were to remain calm on their seats. The P-Square guys were asked which Ugandan artistes they could do collabos with and their response was: Navio, Chameleone, Goodlyfe and Blu3.

The P-Square Concert was organized by Silverback Investments and promoted by Dan Flavor.
Related: P-Square in Kampala to Chop Money