The “cycle of misery” is continuing in eastern Democratic Republic of the Congo (DRC) three years after a major rebel offensive was defeated by United Nations and Government forces in North Kivu, as now, armed militia and rebel groups are again targeti…

Transparency International has launched its annual ranking of corruption, pointing to the negative effects of public sector graft on the poor and vulnerable. The ranking combines a range of factors to produce a best-to-worst chart. Denmark comes out on top, while Somalia and North Korea share the bottom ranking.

Alternatively, the INFORM index is a ranking of countries according to their humanitarian risk. A score from 0 to 10 is derived from a range of elements, including a country’s exposure to various risks, natural or man-made, and its ability to deal with them. On this ranking, Singapore is the least risky, and Somalia the most.

If your country is prone to earthquakes, corruption can’t be blamed. The INFORM index includes “Institutional Capacity” as only one of the many factors in its formula. A government mired in corruption will not respond well to a natural or man-made crisis.

So what is the picture when you combine the two?

Judge for yourself in the graphic below. 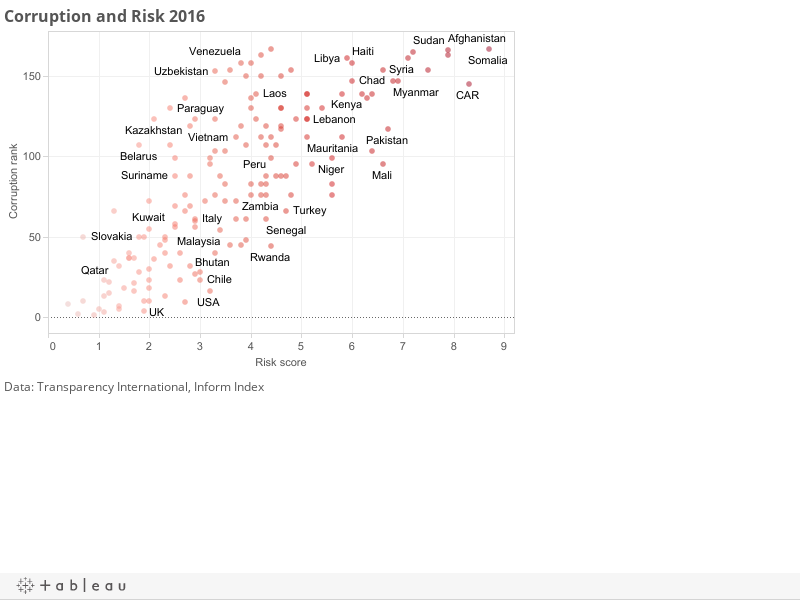 At the worst end of both scales, we see a cluster of troubled countries, Afghanistan and Somalia in particular, both facing the impact of years of conflict and severe poverty.

At the bottom left are some Nordic countries and Singapore – neither corrupt nor risky in humanitarian terms.

A few countries appear to buck the trend: Kazakhstan scores badly on corruption but isn’t looking too bad on humanitarian risk, while for Mali and Ethiopia, it’s the reverse.

ADDIS ABABA, Ethiopia, January 28, 2016As Libya’s yearlong peace talks aimed at establishing a unity government stall again, the lives of millions of people needing urgent health care linger in the balance. WHO and health partners require a total of US…

This appeal has doubled in just three years, largely due to worsening conditions in Syria. “The United Nations Children’s Fund (UNICEF) today announced the launch of a $2.8 billion appeal to reach 43 million children in humanitarian emergencies worldwi…

The Danish government doesn’t seem to mind the global outcry over a new measure that strips the most desperate people of the world of what little valuables they may possess. “Denmark is set to pass a controversial bill on Tuesday that will require asyl…

KAMPALA, The ousted Speaker of the East African Legislative Assembly (EALA), Dr Margaret Zziwa of Uganda, has asked the East African Court of Justice to summon four witnesses to appear and give evidence or produce essential documents which can assist the court to determine her case challenging her impeachment.

Zziwa, who is a former Kampala woman representative in the Ugandan Parliament, is due to present her application before the court on Monday challenging her removal as wrongful and unlawful with a lot of vendetta.

According to her affidavit in support of the application, Zziwa asks the court to grant her application without legal technicalities, stating that her application required serious interpretation of the Treaty for the establishment of the East African Community (EAC).

Applying under the East African Court of Justice Rules of Procedure 2013, Zziwa asked the court to specify the time and place of attendance and its reason whether for giving evidence or for producing documents or both.

She further requested the court to describe with reasonable accuracy the documents required.

In September last year, the Secretary-General of the EAC raised preliminary points of law that the applicant’s witnesses, being members of EALA, could not adduce evidence in court without first complying with the law on Powers and Privileges, hence this application by ZZiwa.

In the meantime, the applicant wrote a letter to the EALA Speaker seeking such leave to prosecute her case and herself with her witnesses adduce evidence, but received no response.

Further, according to Zziwa’s affidavit, after her second request, the Speaker replied stating that the special leave should be requested from the whole Assembly at its plenary meeting which was supposed to be in October 2015 in Nairobi, Kenya.

However, her motion was not put on the Order Paper.

Zziwa wrote another letter to the EALA Speaker, Dan Kidega, seeking special leave for her witnesses to give evidence, but this was declined and she was advised to prepare a motion to a full House session during plenary in Kigali.

Zziwa states that following the Speaker’s negative attitude towards her request, she, together with her witnesses, tabled a motion in the Assembly seeking special permission to be allowed to give evidence in her case, but again it was rejected and leave denied by a vote of five for the motion, three abstained and 23 against it, hence this application seeking court’s order

Diplomats from the United Nations Security Council are wrapping up a visit to crisis-torn Burundi, after meetings with top Government officials in the capital, Bujumbura, where they encouraged all parties to pursue an inclusive dialogue process that wo…

The physical health of 60 million people in developing countries is at risk due to the current El NiAo phenomenon.That’s according to the World Health Organization (WHO), which says the weather event is being associated with cholera, malaria, measles a…

El NiAo threatens at least 60 million people in high-risk developing countries – UN agency The United Nations World Health Organization (WHO) and its partners announced today they predict a major global increase in health consequences of emergencies this year due to El NiAo.

El NiAo is a warming of the central to eastern tropical Pacific Ocean which affects rainfall patterns and temperatures in many parts of the world but most intensely in the tropical regions of Africa, Asia-Pacific, and Latin America which are particularly vulnerable to natural hazards. Typically, some places receive much more rain than normal while others receive much less.

“From Ethiopia to Haiti to Papua New Guinea, we are seeing the damage from El NiAo, and we believe the impact on public health is likely to continue throughout 2016, even after El NiAo winds down,” said Dr Richard Brennan, Director of WHO’s Emergency Risk Management & Humanitarian Response Department, in a press release.

“To prevent unnecessary deaths and illnesses, governments must invest now in strengthening their preparedness and response efforts,” he highlighted.

According to a new report by WHO, severe drought, flooding, heavy rains and temperature rises are all known effects of El NiAo that can lead to food insecurity and malnutrition, disease outbreaks, acute water shortages, and disruption of health services.

The health implications are usually more intense in developing countries with fewer capacities to reduce the health consequences. The current El NiAo from 2015 to 2016 is predicted to be the worst in recent years, and comparable to the El NiAo in 1997-1998 which had major health consequences worldwide.

In Eastern Africa, as a result of the El NiAo in 1997-1998, WHO found that rainfall patterns were unusually heavy and led to serious flooding and major outbreaks of malaria, cholera and Rift Valley Fever.

WHO expects more countries will seek financial support to respond to El NiAo effectively. Part of the response will be to provide additional health services to those in need, such as increased surveillance and emergency vaccination. Immediate needs also require funds to provide treatments for severely malnourished children in many countries, such as Ethiopia.

By Billy RwothungeyoKAMPALA, Allen Kagina, the Executive Director of the Uganda National Roads Authority (UNRA), has vowed that the road agency will henceforth work more closely with local communities to avoid cancellation of funding from development p…

By Samuel SanyaKAMPALA, The Ugandan government has decided to that it will only accept quotations made in the Uganda shilling in contracts it enters into for the procurement of goods and services.The Permanent Secretary of the Ministry of Finance, Keit…